The subtropical and tropical waters in Asia are a great place to go scuba diving with sharks. There are several sharks in Asia; for a little less experienced shark diver, a good starting point would be with reef sharks, leopard sharks, and nurse sharks.

On almost all dive destinations in Asia, you can have shark encounters here; we have a list of our favorite places to do shark diving by liveaboard. 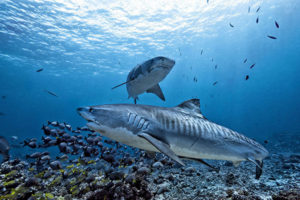 Everyone knows the famous tiger beach in the Bahamas, but the Maldives has their own at the Fuvahmulah atoll. Here are over 40 residential tiger sharks identified. Besides the tiger sharks, the Southern atolls have heaps of other sharks to observe, such as the spinner shark, thresher shark, and night diving with whale sharks. 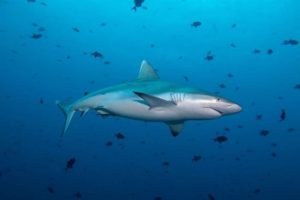 Another fabulous shark diving experience in the Maldives is the central atolls where you can find, besides the regular reef sharks can go night diving with large numbers of nurse sharks at the Alimatha House Reef. Another diving site not to be missed in the central atolls is a hammerhead point where you can see on an early morning dive hundreds of hammerheads cruise by. 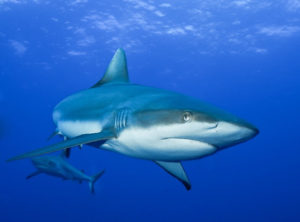 You can see Blacktip reef sharks on Golden passage and Tatawa Besar. Also seen in Komodo are Brown-banded bamboo sharks that come out during the night to hunt, and throughout the daytime, they rest in small crevices.

There are several species of sharks that you can encounter during a liveaboard to Raja Ampat. Reef sharks such as the grey and blacktip thrive in these waters due to an abundance of prey that they can hunt. As top predators around these dive sites, it is exciting to watch them cruising by searching for their next prey.

There are four species of walking sharks that you can find in Raja Ampat. 2 species of epaulette shark and the ornate and tasseled wobbegongs. They are excellent predators even they only “walk” on the seafloor.

The Banda Sea is probably the best destination to scuba dive with hammerhead sharks in Indonesia. In October, these sharks have a migratory path in the Banda Sea. During ng a ten-day Banda sea liveaboard trip, you will have several changes to witness dozens of hammerhead sharks cruising by.

This Dive cruise has a sublime mix of small and big marine life, a dream for every underwater photographer.

Note. This liveaboard cruise is best for experienced divers.

Species of Sharks in Asia

There are over 400 species worldwide, yet to this day, we still discover new species. It is almost impossible to name all shark species in Asia, so we have created a list of sharks you are likely to see during your liveaboard trip.

The leopard shark, or also known as the zebra shark, is a carpet shark. As juveniles, these sharks have a zebra pattern that will slowly change into a leopard pattern when they reach adulthood.

You can frequently encounter them among coral reefs and sandy flats where they rest during the day. Throughout the night, they start hunting for mollusks, small bony fish, and crustaceans.

Reef sharks are vital for maintaining the marine ecosystem where they conserve the delicate balance of reef environments and marine life.

Usually, reef sharks are on shallow reefs where they hunt for small fishes and crustaceans.

Some movies would let you believe reef sharks are not dangerous and are not known to attack humans.

Nurse sharks stay in warm shallow waters where they slowly move over the bottom, looking for small fish, shrimps, and squid. With their strong jaws, they even can crush shellfishes and corals.

They can reach a length of up to 4 meters/14 feet with a tail that can reach up to one-fourth of their total length.

One of the smaller shark species is the bamboo shark that can grow up to 1 meter/3 foot.

Bamboo sharks stay on shallow coral reefs where they hunt for small fish and invertebrates. During the day, they rest in small crevices.

Hammerhead sharks thank their name for their unusual head shape. They range from 0.9 to 6 meters/2 to 19 feet.

Their diet consists of fish, octopus, and favorite stingrays that hunt down on the ocean bottom. Hammerhead also is known to eat sharks, even their species and own young.

The best chance to see These sharks are during early morning dives when large groups swim into the blue.

Tiger sharks are one of the giant sharks in the ocean. They can grow up to 4,5 meters/15 feet.

They will eat about anything from sea turtles and dolphins to sea birds and sea snakes. They will hunt during the night in the shallower coastal waters, and during the day, they will disappear into deeper waters.

Spinner sharks are a very active and fast swimming species that can reach a length of up to 2 meters/6,6 feet.

Their primary diet consists out of small bony fish but is also known to feed on cuttlefish, octopus stingrays, and squid.

Often spinner sharks hunt in groups through schools of fish where they pursue in a ventricle matter spinning around and snapping around them at anything that moves. Sometimes they end up spinning into the air where they get their name.

Another bottom-dwelling shark is the wobbegong; they occur in the shallow waters of Indonesia and Australia.

During the night, they hunt for octopuses, crabs, sea bass, and lobsters. Often they stay still on the bottom or reef until their prey comes close enough to their mouth.

Depending on the shark species, you can see them in the shallow coastal areas and the ocean’s deep parts. There are even species such as the bull shark that can move from fresh to salt waters.

Sharks have low eye side, and the way they navigate and hunt for prey is by a network of the lateral line system along their sides. These fluid-filled channels under the shark’s skin detect pressure waves in the water around the shark. That will make the liquid vibrate what will be transmitted into jelly advancing to the shark’s brain.

As carnivores, sharks primarily hunt for fish, sea mammals, and other sharks. Some species include plankton, turtles, mollusks, crustaceans, and even seagulls to their diet.

There are two ways sharks reproduce Oviparous and Viviparous reproduction.

With Oviparous reproduction, sharks will lay down their eggs after mating on the seafloor or attach them to the reef. A leathery case covers the eggs where the baby shark will develop until the yolk (food supply) finishes. From, then they break out of the shell and swim away.

Viviparous reproduction means that live young will be born from the shark. In some cases, this can be the hatching of eggs where they are still feeding on the unfertilized eggs before birth. Other cases show that some species have a placenta that attaches to the uterus, and life pups are born.

All sharks belong to the Condichthyes classification, which identifies them as cartilaginous fish. Those fish have an internal skeleton that is composed of flexible cartilage.

There are two groups of Chondrichthyes, Holocephali, and Elasmobranchii. The Elasmobranchii have eight orders of sharks. Each order gives you information about their behavior, physical characteristics, and biology. The two most common orders are.

The CARCHARHINIFORMES is the largest order in the shark family and is better-known as ground sharks. These sharks have a wide mouth with sharp teeth behind the eyes.

Some of the species that belong to this order are.

Most sharks in this order have patterned skin, and near their eyes are spiracles. Some of the species have barbels on their chin. The fin and gill slits configuration is the same as by the CARCHARHINIFORMES.

Some sharks that belong to this order are.