Diving With Turtles In Asia

Diving with turtles in Asia

Their cute appearance and personality, sea turtles are among the most favorite sea creatures to see on a dive. Diving with turtles has seen better times as the numbers are declining. But with the help of humankind, these creators that have lived in our oceans for more than 100 million years get a chance to recoup again in protected areas in Asia.

Asia has a high aggregation of green sea turtles and hawksbill turtles that you can find at every dive destination. Less common, but still there are the Leatherback, loggerhead, flat back, and Olive ridley. Here are our favorite dive destinations for sea turtles in Asia.

The Similan islands 1(Ko Huyong) and 2 (Ko Payang) are nesting areas for sea turtles in Thailand. For this reason, the National park decided to close in 1983 to close these islands to the public for a protected turtle hatching program. With these islands, they eventually spread out over the dive sites where you can dive and snorkel with sea turtles. They are so curious that they will approach liveaboards that are anchoring in the bay. 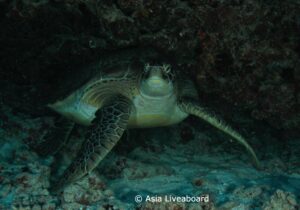 Many scuba divers that join a liveaboard in the Central atolls of the Maldives come to dive with sharks, manta rays, and whale sharks. However, there are lots of dive sites for sea turtles that you can visit. They are a bit shy for divers, but they can get some great photos from the beautiful creators when you approach them slowly.

Located in the Banda Sea is the Forgotten Islands, where you have a reasonable chance to encounter the leatherback turtle. When you time it correctly, these highly endangered turtles congregate each year around the Kei islands. Here they come for the seasonal blooms of jellyfish to feed on. 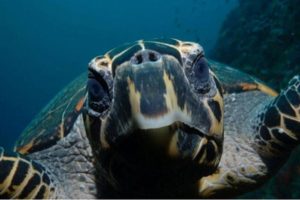 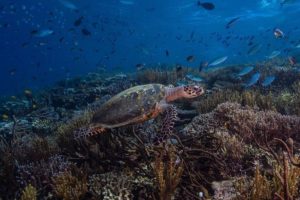 The Komodo national park has several dive sites where you can admire sea turtles. You can see residential green and hawksbill turtles feeding on sponges, and algae are pop up to the surface for a deep breath so they can make a descent again to the seabed for a rest.

Worldwide there are seven sea turtle species, of which five species (Olive Ridley, Leatherback, Green, Hawksbill, and Loggerhead) are known to nest in Asia. The Flatback turtle is possible to see during scuba diving in Eastern Indonesia, known to be feeding.

Adult sea turtles like the shallows near the coast of tropical and subtropical waters live peacefully with other marine life and are near their feeding and nesting grounds.

The diet of sea turtles depends on the species. The hawksbill and the Leatherback are specialist feeders. They primarily feed on jellyfish (leatherback) and sponges (hawksbill). In contrast, the other species’ diet varies from animals and plants such as algae, seaweed, crabs, and shrimps.

The sexual maturity of sea turtles can vary among species as well as populations of the same species. Where leatherbacks are mature already after 7-13 years, the Green turtle takes the longest, with the adult age starting at 26 years of age.

According to research, the carapace size is frequently related to sexual maturity.

Several weeks before the nesting season starts, two or more male turtles may court one female. They use the claws on their front flippers to grasp the shell of the female during mating. The fertilization takes place in the water, just offshore.

A couple of weeks after mating, female turtles will come ashore on a sandy beach where they have their nesting site. Most species of turtles wait for the high tide and night before they come on the beach. The exceptions are the olive ridleys and flatback that have a lighter color that makes them able to go ashore during the day.

When the female turtles are on the beach, they start to make a “body pit” with their front flippers, where they lay their eggs in clutches of 50 – 200, depending on the species.

After 45-90, the ping pong ball-sized eggs will hatch, and the hatchlings will crawl to the sea. They usually will do that during the night when predators have the least chance to capture them. Nevertheless, only one out of one thousand will survive until adulthood.

Green sea turtles are easy to be identified by their short snout and a beak that is unhooked. Also, the green turtle has a bigger, darker, and more domed shell than the hawksbill. The color is a brown buff as well as other earthy tones.

The Hawksbill turtle is one of the smaller species of sea turtles. It thanks its name to the V-shaped head what gives it a hawk appearance. The color is amber and brown. The average size is 90 cm, with a weight of 80 kg.

The Olive Ridley is the smallest one of the sea turtle family with a nearly round shape shell with a dark-olive green color. The average length of 75 cm and only weighing in at 50 kg.

Leatherback sea turtles are a giant turtle you can find in the oceans with an average size of 170 cm and 450 kg. They are mainly black with a variable degree of spots of white or paler.

This olive-grey sea turtle has an average size of 100 cm and a weight of 90 kg. Only found around Papua New Guinea and Australia.

The loggerhead has a red-brown to brown color and has an average size of 100 cm; the weight is between 100 and 180 kg. It is less common than the green and hawksbill but still found on some dive sites around Asia.